Even Barbie is Moving

Have you heard the news? Barbie is moving! I know I’m always saying that everyone moves eventually, but when I heard the this news, I must admit, I was a little surprised. I mean, honestly, she’s putting on the market a house with a mirror that pulls down and becomes a bistro table? That’s gotta be tough.

But it’s true. Barbie is moving. Evidence: I was walking along the Embarcadero looking at t-shirts and jewelry with my daughter and son when I saw what looked like a pink moonbounce that could hold the U.S. House of Representatives. What Barbie madness can this be? I asked myself. Then I saw the sign.

“I’m gonna have to go in here,” I apologized to the kids. I talked to the Hashtag Barbie Is Moving doorman/bouncer and he told me to register and I could get in and also qualify for the big drawing for a free Barbie dream house “for your daughter.”  (He gets points for not saying “for your granddaughter.”)

“But where is she moving?” I asked, more concerned about Barbie’s mental health and stress cardiomyopathy than a free dream house. We had already donated our old Barbie dream house to the Jenkins kids across the street before moving to Florida. I didn’t need another one. I’m running out of girly girls in my life.

“We’ll announce it Labor Day,” Barbie’s bouncer said. “We’re doing this national tour and then we’re going to announce it. Would you like to guess where she’s moving?”

Are you kidding? Of course I want to guess where Barbie is moving. But first I had to ask, “Where does she live now?”

Right. The tan, the long blond hair, the fake boobs, the fake . . . everything, what was I thinking?

I know for sure she’s not going to move to San Francisco. An in-state move would be so anticlimactic. Plus she wouldn’t last 15 minutes in those stiletto mules walking up our hills from her job at the veterinary clinic/ airport/ school/ bank/ pediatrician’s office/ hospital/ NASA space station.  According to this Vogue article Barbie has held down 125 jobs. Moving to the Bay would require foot reconstruction surgery so she could wear ballet flats, and the last time I checked, she can’t have built up enough vacation or sick time, with all the job hopping she does.

I’m going to say Barbie is moving to the Midwest. Her publicists have most likely ruled out the South for being too politically divisive, although one of those Southern belle accents would suit her. She’s definitely not relocating to the East Coast; New York Barbie is so expected it’s almost cliche. (On the NYC part of her tour? I hear she spent a lot of time at the Pleasure Chest in the West Village, if you get my drift.) And you can forget Alaska or Hawaii. Non-mainland Americans don’t have enough collective enthusiasm to deserve to be Barbieville. And let's get real: The woman lives on wedding cake and champagne. The Alaskans would probably put her to work on a fishing boat. And what shoes, in God’s name, would she wear then?

No, I’m convinced it’s the Midwest. It’s the only place in the U.S. where she can afford a house with a walk-in closet and a man cave for Ken.

So the big announcement is set for Monday. The tour, which started in June and ends Sunday in Newport Beach, California, is not only “pinktastic,” it’s full of other cringe-worthy quips.  Your daughter will look “a-doll-able as the new Barbie BFF!”  “Join Barbie on her dolltastic road trip.” “Your Barbie girl will yell OMG . . .” Can you imagine how exhausted Barbie must be, after a summer of grinning through all the Toys R Us stores, Walmarts and KMarts across North America, and that’s before she even starts her house-hunting, staging her Malibu place for that killer market, packing, inspections, and filling out all those home mortgage forms.

Based on my experience, which as you know is vast, she's gonna need to prepare herself mentally and physically for this move. I think it's time to open up that little plastic bottle of wine and fill up that tiny wine glass.

Posted by Unknown at 9:17 AM No comments:

She WILL Have Her Burger

Home Sweet Homes friend and fan Janine, who is involved in a move of her own right now - and I mean right now, as in, while I write this she's probably forgetting to pack something -  read my chapter about temporary living and, as expected, topped my stories.

Remember when I talked about how I failed miserably at choosing what to take to the temporary apartment and what to send into storage? It takes a special kind of fail to break apart something and take one piece and not take the other pieces.

"Okay, okay. Redneck grilling.  When we moved to our temporary home in the resort we only brought the bare minimum because the home we are staying in has most everything we need. It is a fully stocked and supplied three bedroom home that you might remember belongs to Steven's parents and we have vacationed here in the past.

So, yeah - we didn't need a lot and most of our stuff is in storage.  Even our grill.  Except, oddly. . .the grill pan to that grill moved here with us.  Just the grill pan. [Fitz you can stop laughing now.  I just kept picturing your temporary moves as I stared that grill pan down.]"

Yep. The grill body, the grate - nothing moved with us except the pan that holds the smoker chips.  Whatever. We made hamburgers anyway.  I am nothing if not resourceful.  I keep good company. Women, like you, that teach me to make do or do without.

And I wasn't doing without grilled hamburgers on Sunday." 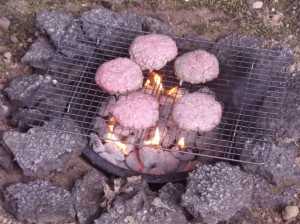 Looks to me like pieces of broken up asphalt and a cookie cooling rack. We are talking Resourceful with a capital RESOURCEFUL.

What did you forget to take to a temporary apartment, and what MacGyver moves did it bring out in you?

Posted by Unknown at 9:21 AM No comments: 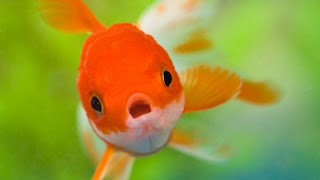 Tracy of Buffalo, New York, read our story about Lipstick, who lost his groove and his color during our move from Illinois to New Jersey, it reminded her of her moving saga with her daughter’s goldfish Jerry.

“I have to share with you the story of Jerry (partner of Tom who died almost immediately) the 50-cent goldfish Lucy got for successful completion of potty training. We emptied most of the water out of the 10-gallon aquarium in our second-to-last move, but left just enough for him to swim inside the hard plastic Little Mermaid figurine Lucy placed in there to keep him company. (The kind that sits on top of Disney Princess themed bubble bath.) The thing had fallen onto its side so he had a nice dark place to hide while getting sloshed around in our back seat.

Since Lucy had school the next morning, I had to get her ready and so never really noticed what the fish was up to. But of course she saw it on her way out the door that next morning. I figured he had gone in there to end it all and rushed her out of the door assuring her he was only sleeping, prepared to deal with breaking the news later.

By the time I got back the stereo/TV guys were there to set everything up and once I pointed them in the right direction, I went over to deal with the task of scooping Jerry up for his final flush. But of course I discovered the little bugger was still alive and just stuck, and I mean STUCK, in the Little Mermaid and he desperately wanted out.

What ensued was about an hour and a half of trying to pull a slippery as hell goldfish out of a very inflexible plastic toy. The stereo install guys ended up getting involved, and oddly emotionally attached to the fish. It was like a whole other sort of Disney movie at this point with the heroic pet rescue theme. It took a variety of tools and time that was costing me at least $75 an hour for the glorified AV guys, but Jerry got out of there, a few scales less and a little short on the dorsal fin, but by God he made it and lived at least another year (during which I never cleaned his tank once.)

Posted by Unknown at 9:23 AM No comments: