As anyone who has ever moved knows all too well, one of the most difficult aspects of moving is getting the children to accept the changes and settle into their new home. Heather Maisner's children's book We're Moving has been a godsend to parents who want to explain an upcoming move to their young children in terms they can understand. Here, Heather talks with us about her writing and the children for whom she writes.

Tell us something about your background and writing career. 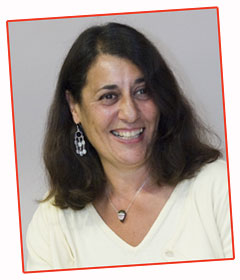 I grew up in a lively household with two sisters, a dog, a cat, two budgerigars, too many visiting aunts and uncles, and over 20 cousins. I used to hide away in the lavatory, making up stories. I wrote a novel (unpublished) when I was 12, and won the Daily Mirror Children’s Literary competition out of 35,000 contestants when I was 16. I always knew I wanted to be a writer. I began writing for children after my son and daughter were born.  I’ve now written over 30 children’s books, translated into eight languages.

What led you to write the book “We’re Moving?”

The stories I write for the very young are often based on real-life situations. When a publisher was looking for an author to develop a series about the everyday events in a young child’s life, several authors wrote samples. Happily, mine was chosen. “We’re Moving” is one of four titles about Amy and Ben.

In “We’re Moving” you zone right in on exactly what causes preschool-age children anxiety about moving - leaving friends and familiar surroundings, missing the flowers they planted, the emptiness of the new house at first. How did you get that insight into the mind of a child? 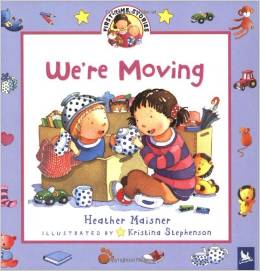 Fulham, where I live. I am also Author in Residence at two local schools. In this part of London, there are many transient families. I visited schools and asked the children how it felt to move house and what they missed most from their old homes. I spoke to many children and parents and, when I had written the story, I read it to the children, too. I felt it was really their story.

All children handle moving differently. What are some of the more common responses to moving that a parent can expect?

During and after the move, a child’s behavior can suddenly change: They may become withdrawn or irritable. They may start having tantrums; their sleep can be disrupted and they can become fussy about eating - or not want to eat at all.

Is there such a thing as being too young to be anxious about a move?

It is never too young for a baby to be anxious. A psychotherapist friend, who works with mothers and babies in a neo-natal intensive care unit, says even premature babies can be anxious, as they pick up their parents' stress.

What advice do you have for parents who are moving children and want to alleviate some of that anxiety they’re going through?

It’s a good idea for parents to prepare children in advance. You should visit the house a few times, if possible, and talk about what is going to happen; get the children to draw the house or their new bedroom and plan some exciting things they might want to do when they get there. On the day of the move, children can help pack their belongings, and it’s important to let them keep their favourite toys safe beside them on the journey.

On arrival, make sure their bed is made up as quickly as possible and put up some pictures or hang curtains from the old house in their room to make them feel at home. Spend time as a family  – go for a walk, go shopping, enjoy the new surroundings together. Naturally, parents are frantically busy trying to get everything done but it makes a real difference if you spend as much time as possible with the children, too.

When you’ve settled in, remember to visit the old house and keep in touch with friends. If you have moved far away, children can draw or Skype or look at photos, so that they don’t feel they've dropped off the end of the world or that something bad has happened. Above all, spend time with your children: listen to what they have to say; go for walks and explore the area together, so that everyone gets to enjoy this new adventure in a new place. 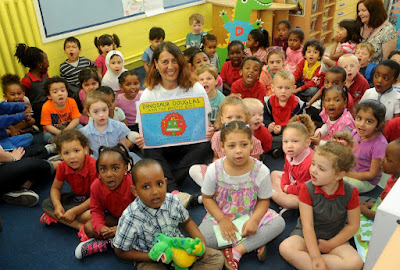 ~ ~ ~
In addition to We're Moving, Heather Maisner has written more than 30 children's books. More about Heather and her books can be found on her website at www.HeatherMaisner.com.

~~~
If you like Diane's humorous take on moving, you'll love her book Home Sweet Homes: How Bundt Cakes, Bubble Wrap, and My Accent Helped Me Survive Nine Moves.

Posted by Unknown at 8:25 PM No comments:

4 Things to Remember About Your New Home 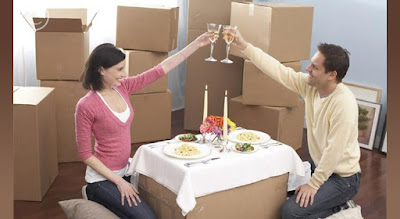 While that's pretty common behavior, it's also indicative of the roller-coaster of  emotions that surround moving from one house to another. No matter how excited you are to start over in a new place, perhaps with long desired features, there's always at least a little pang of regret about the changes.

It's hard not to compare a new house with your old one. Why? Because change is hard, even when it's for the better. One blogger summed it up quite nicely: "My emotions about the new house are playing ping-pong and I don't like it."  Moving is an extremely emotional experience and you should expect to change your opinions about your new home.

Remember, regardless of where you're moving from and where you're moving to, there's something - at least one thing - that's better than your old house. Focus on that, play it up. And when the negative feelings start to creep up on you, remind yourself of all the benefits of this new house. The power of positive thinking wins out every time.

2. It has a history and it's probably not a simple one

When we bought our 100-year-old Edwardian house in San Francisco last year, I was a little put off by the features that were not in keeping with the period. The house had undergone major renovations in the 1980s and it showed in the brass fixtures, mirrored walls, and built-ins.

My first thought was to rid the house of these dated features and restore the home to its original 1913  look. But then I thought: This house has more of a history than the first year it was built and the first owner, the builder and the architect. Its history includes a slew of owners, who put their personal mark on the house.

So we got rid of some elements of that history - the shiny gold fixtures in what we now call "the Donald Trump bathroom," the greenhouse that was obviously used to grow non-medicinal marijuana, and the mauve, plum and gold-leaf exterior. But the rest we'll keep as a record of the history of the home. We're hoping it will come in handy for the big '80s parties we'll throw!

3. There will be surprises, good and bad

You know the honeymoon with your house is over when you realize that the jacuzzi - you know, the main thing that made you buy the house in the first place - has a layer of dust on it and you haven't used it since the day you moved in, two years ago . . . That "must have" fireplace in the family room has never once been lit . . . The bonus room that you planned to use as an office is as cold as ice in winter, and as hot as Hades in the summer . . . and the room you chose for the baby is the one that gets all the noise from the neighbor's yard - you know, the neighbor who loves fireworks.

On the other hand, that weirdly shaped corner in the dining room that you thought was "stupid" ended up to be the perfect spot for your funky reading chair, giving new purpose to an underused room  . . .  The formal living room you thought you'd have to learn to tolerate is now your favorite space in the house . . . and the adjustment from two bathroom sinks to one isn't ending up to be a problem at all.

In order to be pleasantly surprised by your new home, you're going to have to keep an open mind, be open to change, and be willing to learn to adapt. A friend who recently moved from a big home in Texas to a condo in California said she was at first upset that none of their "big Texas furniture" would fit in their new digs. "But then I thought, it's time for a change for us anyway." She and her husband love their brand new sleek, streamlined, modern furniture, and are surprised at how easy downsizing was.

4. You can make it your own without changing its character

Today's decor and design choices make it so easy to make your new house the perfect living space for you and your family, but still keep it in its best light.

* Don't over-decorate the more functional rooms in the house, such as kitchen and bathrooms. Make these rooms "function over form" for convenience.

* Embrace an eclectic decor, and your antiques will go well in your new contemporary house, and your modern art will look fabulous in your 1880 farm house.

Remember, you live in your house now. Make it livable and you'll love it!

Posted by Unknown at 8:28 PM No comments: