An Army Brat Who Wrote the Book on Military Life 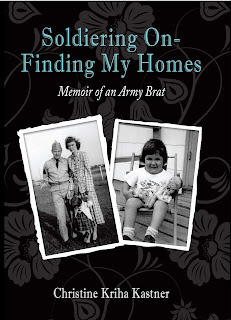 I've been reading up on military families and all that they endure, not least of all the frequent moves. A US serviceman or servicewoman's family moves about every three years, and children from military families move an average of 10 times during their childhoods.
That's a lot of being the "new kid."

I know from my own experiences that when my kids were going to their new school on their first day, I felt like my heart was being torn out. I wanted to drive alongside the bus and follow them from class to class, making sure they were OK. Knowing that would never fly, I stayed home and picked my cuticles and watched the clock. I don't know who was more relieved after the first-day stress was over - me or them.

My kids have had to do that way too much. And military kids find themselves there even more often.

Organizations like the National Military Family Association has programs that help the children of military families adjust to new towns, new schools, and parent deployments. But it's still not easy for military brats, knowing the next reassignment is right around the corner.

Author Christine Kriha Kastner of Cleveland, Ohio, has a different version of this story in her memory banks. By the time her father retired from the US Army, Christine and her family had moved 14 times. One of their homes was in Okinawa, where Christine formed lifelong friendships. She returned to her old school and wrote a book about it.  Soldiering On - Finding My Homes: Memoir of an Army Brat tells of Christine's time as an American child in Japan and her memorable return visit there as an adult to reconnect with old friends and classmates.

Living in 15 different homes and going to 10 different schools could make Christine and other military brats feel sorry for themselves. But Christine saw it all as an adventure. You won't find any whining or complaining in her book.

As a frequently-moving military brat, I can tell you that our moves were mostly fun—for us kids—but probably not so for my mother!  We lived in 15 different houses by the time my father retired from the Army.  For military families, moving arrangements were dictated to us, and we were used to following orders.  The packers showed up.  We had to be ready.  No excuses.

Sometimes we had to sort belongings to send off to permanent storage while we lived overseas.  Every move involved weight limits and Mom was always “purging” our belongings.  We never knew if something was off in storage or had been given away.  The best part about returning to the States was when the stuff from storage was delivered back.  It was so much fun to rediscover past treasures—toys and games and books that had been stashed in those boxes for all those years—that Mom had not tossed after all.  It was like Christmas all over again!

Learn more about Christine and Soldiering On - Finding My Homes: Memoir of an Army Brat at http://christine-kriha-kastner.com.