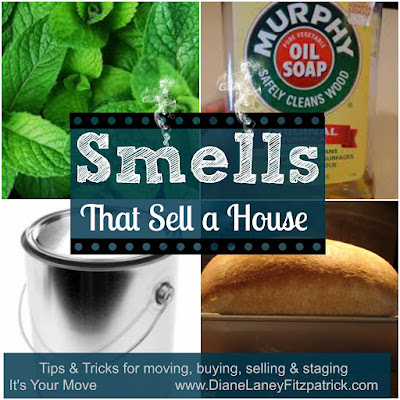 The first house I sold, my Realtor told me to bake chocolate chip cookies the day of our open house. "The smell of cookies baking makes people nostalgic," he said. Ah, if it were only that easy!

The smell of your house, while only one factor in making it desirable to buyers, is still an important one, and playing to house-hunters' sense of smell can improve their overall opinion of your home.

But unless you live in a seller's dream market, you're going to have to think beyond chocolate chip cookies if you want a smell that sells.

It's generally agreed that strong, artificial air freshening smells are a no-no in home selling. Strong potpourri, air fresheners and sprays will make home buyers suspicious. They'll know it's hiding something and will become preoccupied wondering what that is.

Every home buyer is different, with different tastes, allergies, turn-ons and turn-offs. For every buyer who loves cinnamon sticks simmering on the stove, there are two who say they'd turn around the walk out the door. So the challenge is to be neutral and appeal to the widest spectrum of buyers as possible.

Almost everyone is offended by strong artificial smells that scream out, “I’m masking something horrid!” like:

The thing is, no smell is immune from offending someone, either because of personal taste, sensitive noses, or allergic reactions.

One woman on this real estate forum said, “If someone boiled cloves and oranges or anything with cinnamon, I would probably turn around and head out. That house would be off the list for me.” Now, you as the seller might adore a citrusy-clove-cinnamon smell, but you’d be wise to think about the diverse market out there, and go neutral.

Hardly anyone is put off by light - and I stress light - smells of:

“Generally clean,” but not bleach

Freshly baked bread or baked goods, but not too sweet

As long as it's not too overwhelming, home sellers have had success with dabbing some lemon oil (not the cleaning kind) on a couple of light bulbs in the house. If you really want to simmer cinnamon, cloves, allspice and bay leaves on the stove, do it for a short period of time, well before your open house or showing appointment.

Whatever odor-masking methods you use, be sure to open the doors and windows and let fresh air in to neutralize it.

The #1 can’t-go-wrong best smell for your house

Easy: There’s a general consensus that the best smell in a stranger’s house is:

If you don’t own pets, you’re a non-smoker, and you keep a clean home, you can easily have a house that smells like Nothing.

Clean your furnace filters, have the house professionally cleaned, and avoid cooking strongly aromatic foods when you’re house is on the market.  Remember, the smells that you love may not be as adored by prospective buyers.

How to deodorize your house for sale

* Kitchens are the hotbed of odors in a home. Clean your oven to get rid of any fish dinner smells, but do it in advance. The smell of oven cleaner isn't a favorite of many people, either.

* Sniff near sink drains. If there are any lingering odors, sanitize them with cleanser and lemon.

* Don't forget the laundry room and anywhere laundry sits in a hamper.

* Clean and air out the basement the best you can, to get rid of any musty or moldy smells.

* If you have a child in diapers, be sure to empty the diaper pail often and air out the nursery.

* And if you have pets, be especially aware that non-pet-owners will detect pet smells better than you.

For more good scents sense, check out this article from Lillian Montalto "Using Scents to Help Sell Your Home."